Interview with the artist, Santiago Insignares

Santiago Insignares is the young and smiling artist that I met in 2017 at ArtSpan, in San Francisco. He speaks English, Spanish and Italian, that’s how we started talking in the first place. Santiago is a sculptor with a multicultural background and lots to talk about. Instead of words, he uses his fingers to shape a vocabulary extremely intuitive—a sculptural language that translates visually his inner world. Rather than from feelings or mood, his sculptures are born from memories, nostalgia and from the interpretation of past experiences.

Indeed, Santiago has quite an interesting past; born in New York, raised in Bogotà, studied in Turin, Italy, where he spent 4 years at the IED (Institute of European Design). After that, he left to explore Asia. Traveling, international experiences and the reality of the Colombian capital shaped Santiago Insignares’ imagination. Surrealistic sculptures and anthropomorphized buildings with vibrant colors, and sometimes contrasting tonalities, fill his studio like a multicolored collection of shelters for the soul.

His studio is located in a quiet area, far from the Downtown, at the bottom of a narrow alley that you would never imagine hides an art studio. I meet him there for the second time. 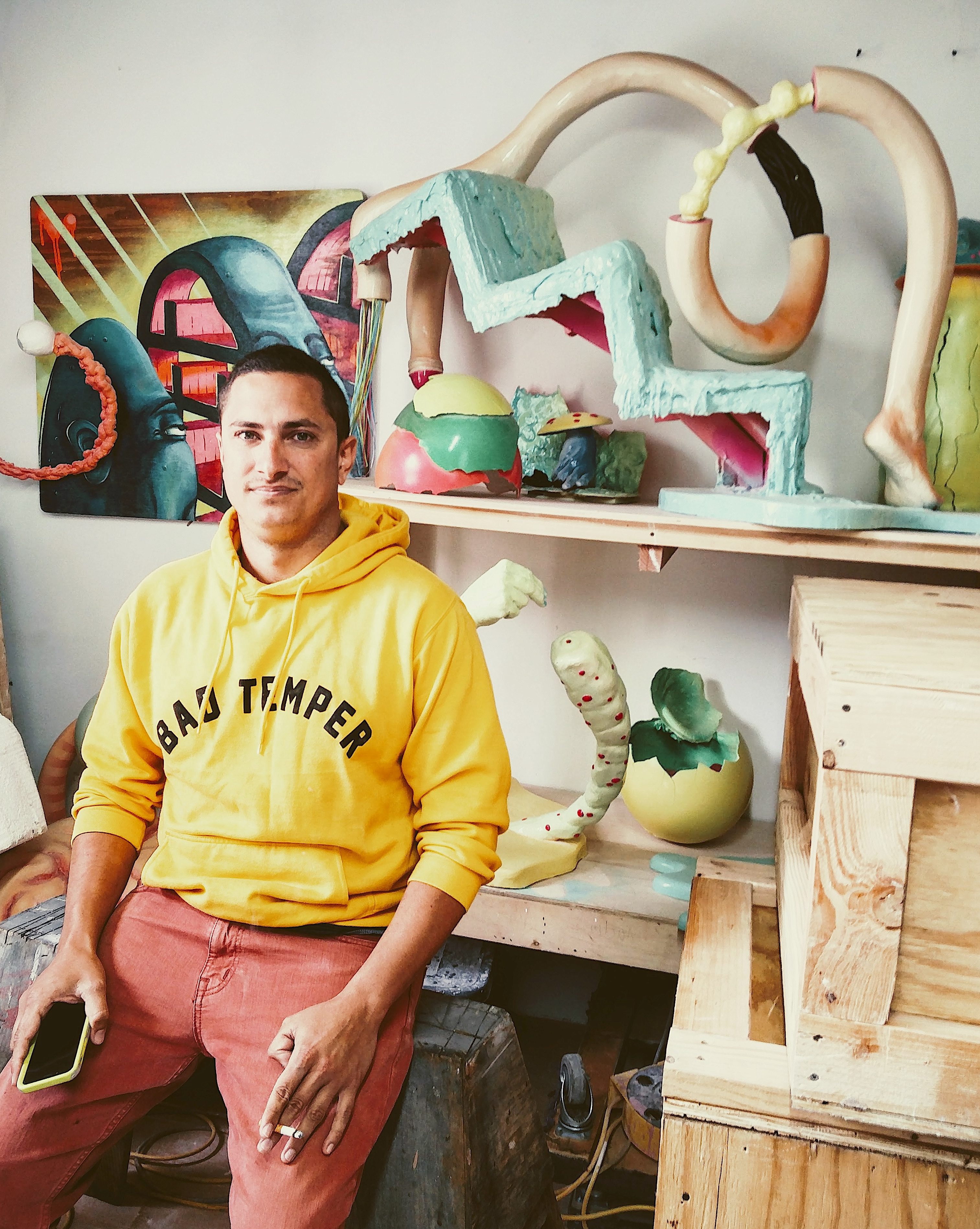 “Even though I was studying illustration (children’s books illustration) in Italy, I was still obsessed with painting on wood panels, specifically found wood panels that had a particular texture or a discolored surface…I have fallen in love with the texture of wood, never really liked the canvas. After University I went to India for a sabbatical year. There, in the South, I met an incredible wood artist, who hosted me and showed me his work process: carving wood the whole day, a really slow process built on patience and time, shanti shanti.

“When I went back to Colombia I started teaching Visual Communication and Animation at the Pontifical Xavieran University of Bogotà, but on the side I was still going on with my illustration projects. I also entered in a Carpenter Studio, a sort of cabinet: the Buma and Rony Garcia brothers. There I learned how to build wooden panels, which took me only a week…After having learned that quickly I started working for the Garcia brothers, and I refined my technical mastery in furniture restoration. This experience really helped me to understand the craft, and the complexity of the process of making a piece of furniture that involves carpenters, sanding phase operators, a main builder, painters; in other words the whole infrastructure behind the process. In this way I also got connected to the clientele of the Carpentry and I met different people…so overall it was also a cultural experience for me”.

Regarding the definition of “cultural experience”, Santiago explained to me that the Colombian society is divided into 9 castes, in a similar (although less extreme) way as the Indian society. The Government decided to gather the dwellers within socio-economical levels, ascribing to them numbers from the lowest (0) to the highest (9). None escapes this system, from the homeless to the poor, to the middle class up to the highest class of individuals. The castes system has a strong impact on the relationships amongst the community of Bogotà; it segregates the dwellers in a static network and prevents the urban evolution that, instead, comes from a dynamic ecosystem.

“What I was most loving about having conversations with the other workers at the Carpentry, belonging to casts different to mine, was listening to them recounting their experiences in the upper class houses. They were going there to pick up old or ruined furniture to refinish it, and they were used to analyzing the higher class members based on their furniture, on the style of the houses and on their belongings. This is how I started creating my own customized furniture.”

A crucial event for Santiago has been the advent of a paramilitary army that killed hundreds of citizens, mostly farmers and lower castes’ members. The news revealed that innumerable bodies have been left in pieces by the tortures and the brutal violence of the paramilitary. This acknowledgement shaped Santiago Insignares’s first collection of furniture, based on the dissection of the human body. 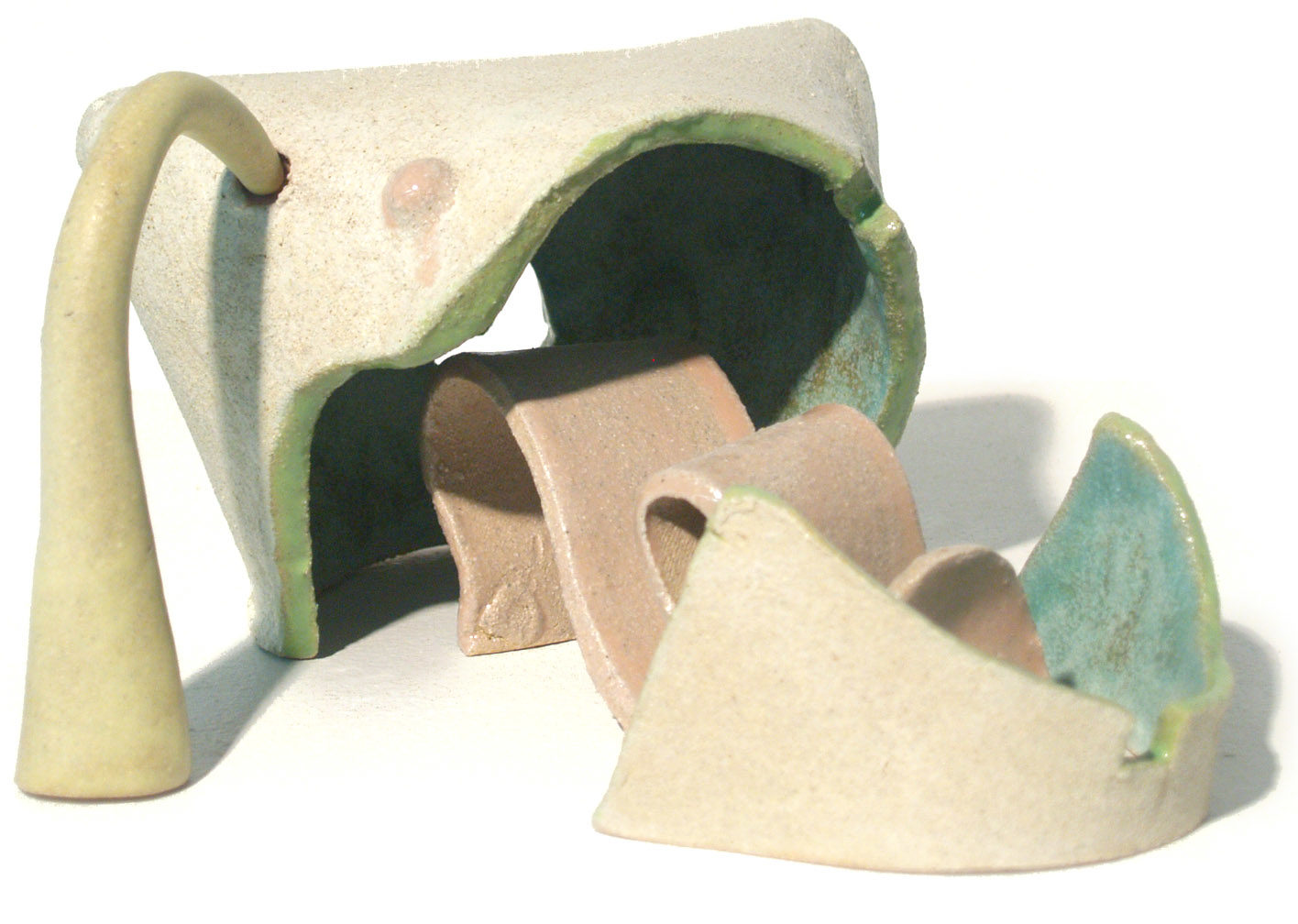 “The idea was making functional furniture by dissecting the human body. As an exercise I wanted to be able to sell very expensive furniture to the higher castes, to introduce well refined pieces of bodies in their living room to decorate them, for them to sit on. What I had in mind was inserting the urgent and cruel reality of Bogotà in the life of the privileged castes through a subversive method (the decoration of interiors), despite their own ignorance. It was also a way for me to digest, on one hand, the extremely shocking information of the paramilitary violence and, on the other, of the disconnection from it of a big part of the Colombian society (the wealthiest). The furniture was colorful and with pretty shapes, the clients didn’t recognize dissected bodies in it, but instead cool, expensive pieces of furniture.

“This is what I like of furniture. Buying a sculpture is a luxury, buying expensive furniture is actually a thing that people can allow themselves to do. I exhibited that collection at La Residencia Gallery, in Bogotà. After that I was aware that I wanted to be an artist, not a designer or an illustrator”. Soon after, Santiago started traveling in Colombia and the USA. What finally brought him to San Francisco was the desire to “understand what Art is today, to go deeper in the conceptual part of the contemporary artistic language, and to see if what I was doing in Colombia could actually find a resonance in the USA”.

About the evolution of his artistic practice, Santiago concludes:

“There has been a transition between the illustration, to 3D illustration (what I otherwise call ‘illustrated objects’) and then finally sculptures. One of the first sculptural works consisted in carved wooden masks. Through them I re-translated, again, the acknowledgement of the atrocities characterizing the Colombian contemporary history. The facial expressions were the result of a dissection of the human face, but they were expressed in a playful manner. Colors and shapes hid, again, feelings of sadness, boredom, resignation…” 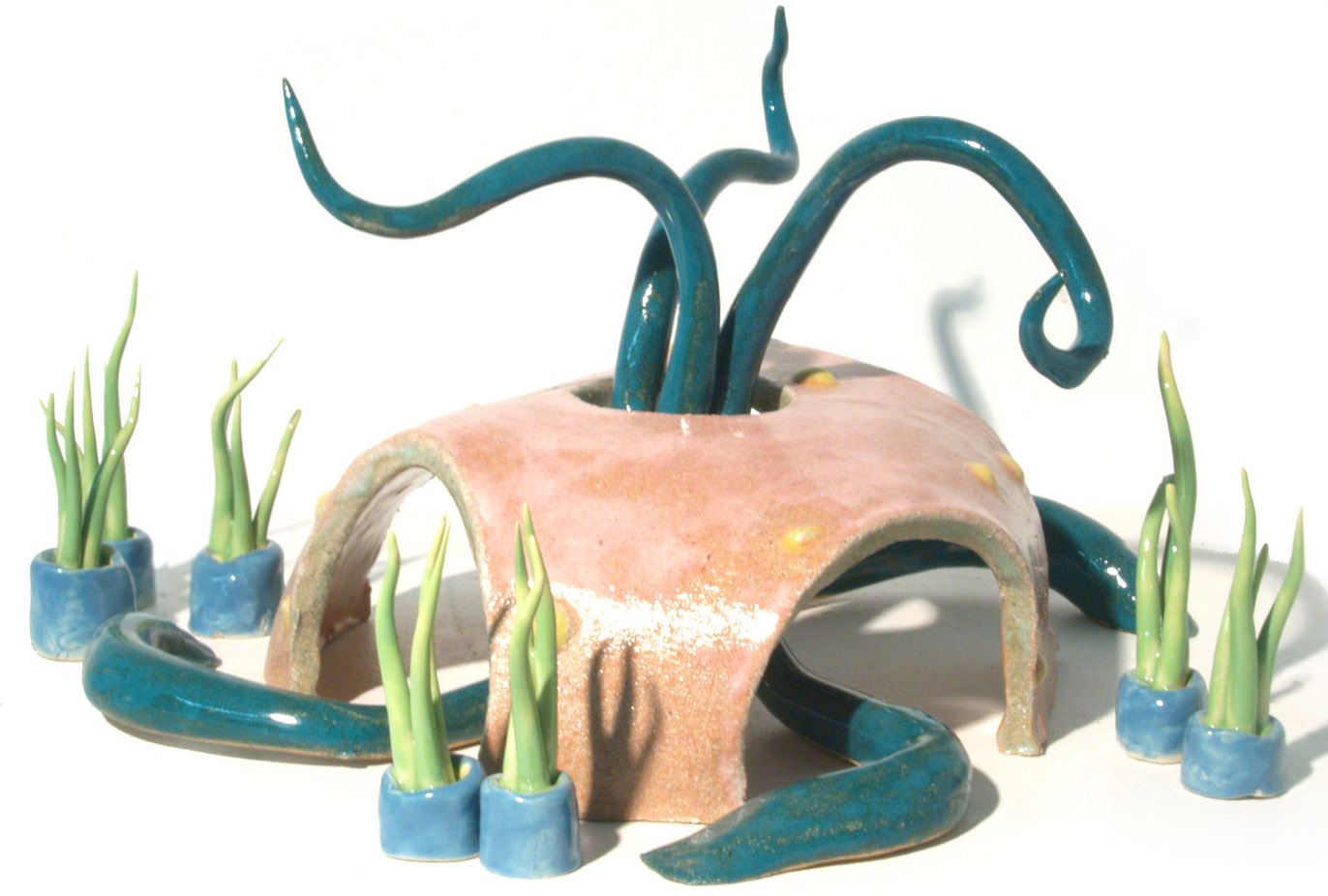 Santiago’s artistic process has evolved enormously since his first series of furniture and sculptures. If at the beginning he was inspired by design, and then by a cogent conceptual component, once he moved to San Francisco the laid back city’s mood got into his work. Coming from a structured creative process, tied to the furniture craft and to the design, and even to the wood carving, Santiago Insignares shifted to moulding sculptures and ceramics, which allows him a more instinctive approach. It has been 2 years now since he abandoned any sketch book.

“This medium (ceramic) totally changes the way I work now, and all that you see in this studio comes from that perspective. I see new shapes coming out, indeed one of the Art’s elements I like more is the will in being open, always. There has to be evolution…other wise it’s going to be boring. Now I really like the approach of being pointless. I want to work with that, starting with no object in mind, creating first and finding the meaning of the product in a second moment. Once I made the piece, its colors and shapes capture my interest and I start wondering: ‘Why did I use those colors? Why did I make those shapes?’… Especially with the clay, I immediately started recognizing in the artistic outcome biographical elements: the nostalgia, the relationship with my father, an architect, and how his idea of a sustainable house became the symbol of what for me is the structure of family. My clay sculptures represent safe or nostalgia spaces, it’s like a neighborhood of nostalgic moments coming from far away”.

Within the range of the various stages characterizing Santiago Insignares’ artistic vocabulary, and the use of different media, there is one element that repeats itself: “tropical colors, this is the main conductor of my work. My artistic practice has seen different concepts and shapes during the time, but the use of colors is very consistent. It creates a homogeneous collection of works. I use bright colors to generate discomfort in the viewer. On one side you see nice shapes and joyful colors, on the other I add a second layer of information, critical, stressful or that might offend you. I really enjoy the contrast between the aesthetic value of the object and the idea that it represents.” 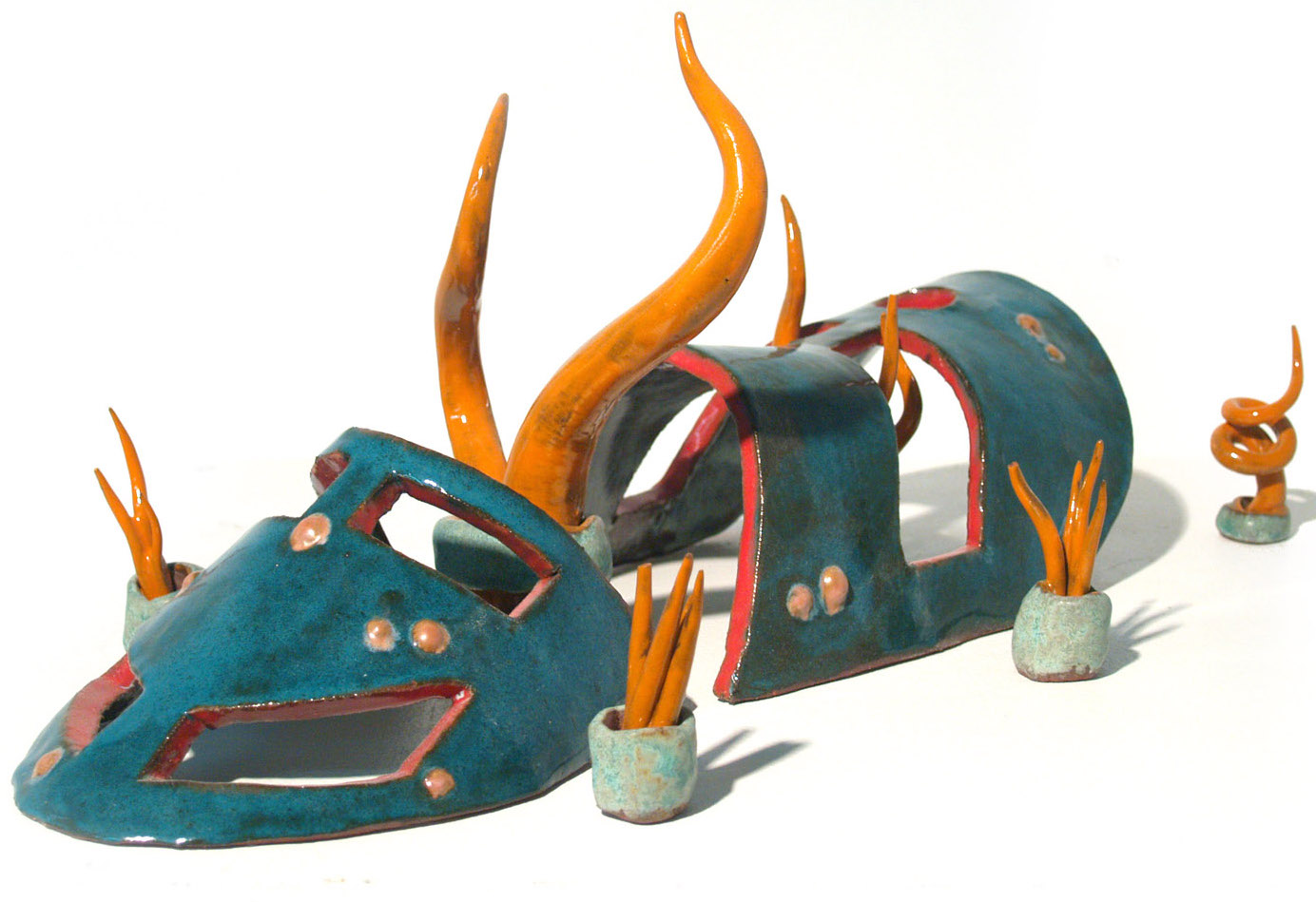 So, what’s the point of choosing such a plastic and diversified language? “My final objective is to travel with my work, show it to different cultures and eyes. This is why we make Art, not for money but to educate, to communicate with people. Art develops through various narratives, and our work can obtain multiple meanings depending from who’s going to watch it”.

When I ask him if there’s a word or a sentence of which he thinks when producing Art, he pauses and answers:

“Trauma drives our life. The way in which we perceive ourselves depends from the traumas we experienced. This belief drove my artistic approach for a long time, but this view is changing. Now I’m thinking a lot about nostalgia for places that are not going to be the same anymore.”

What firstly comes out from Santiago Insignares’s talk is self-awareness. At 31 years old he reveals mastery and competence in his art practice, and this is possible, in the first place, because he knows where he comes from, where he is and where he is going. This attitude, that we could also define as focused, allows him to remain consistent although the continuous experimentations with different media and styles, and lately it extended itself in the courage to let oneself go during the creative phase.

On the other hand this peculiar conscientiousness is linked to the constructive attitude toward life experiences. In order to survive we have to assimilate new information, even if it’s undesired. What makes the difference between a constructive life approach and a degenerative life approach is the ability to integrate new and undesired information in our vocabulary, to turn it into bridges for communication and personal growth. I don’t believe that Art is a form of therapy for Santiago Insignares, but I do believe that it drew the path for reaching those bridges. 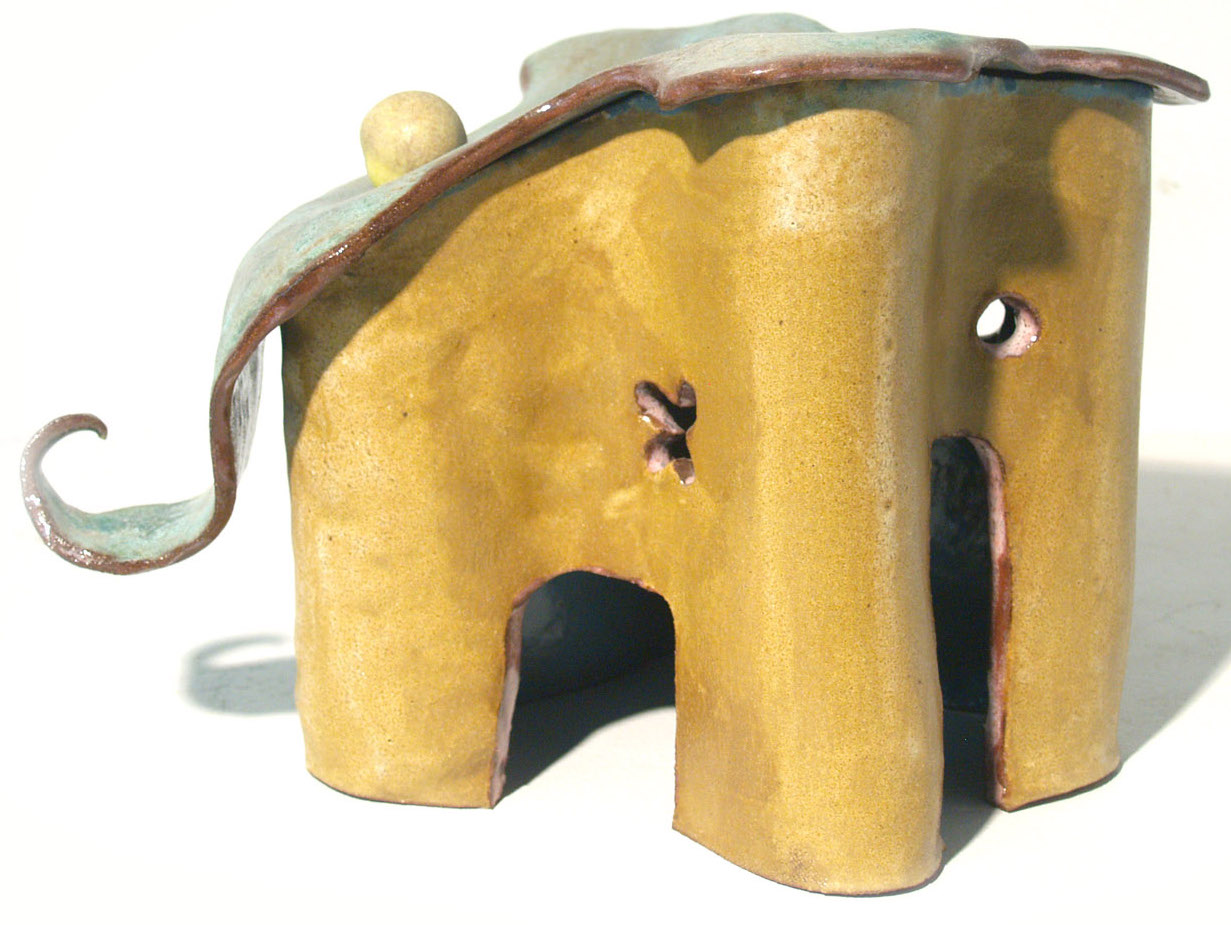