What I do when I feel I’m getting bored, is to plan to see beautiful art; so I start checking out the exhibitions in town online and I leave home as fast as I can to reach them. This is how I ended up experiencing one of the most memorable exhibitions that I’ve ever seen: Awaking Beauty, the Art of Eyvind Earle.

It was a Sunday afternoon and for a while I had kept saying to myself: “Elena you must see this”, precisely every time I came across one of the billboards sponsoring the Walt Disney Family Museum‘s exhibition. Lesar was out of town, so I just thought: “now it’s the time!”. There are so many good reasons to visit this Museum, first of all the location. Presidio is one of the best green spots of San Francisco, it has many little cultural jewels, like the Palace of Fine Arts, the WW2 Memorial and the San Francisco Film Center, and it gathers several locations offering an irreplaceable view of the Bay Area’s coast (the one of the Golden gate bridge is the icing on the cake).

So here I am, in front of a classical, red brick building that you wouldn’t expect hosts such a colorful and various content —Disney’s family and personal photos, objects, sketches and paintings that display the history of the revolutionary cartoon company. In fact, once you’ve stepped into the gallery, you experience a new world and you forget where you are; the legendary images of the cartoon characters brought me back to my childhood, when I actually started loving illustration thanks to the fine art drawings of Snow White and Pocahontas, to name my favorites.

The 40.000 square-foot’s Museum include the Diane Disney Miller Exhibition Hall, where Earle’s paintings are on display through January 8th 2018. Eyvind Earle, ever heard this name? If not no worries, you’re not the only one. Although his incredible talent and prolific work, Earle’s profile remains a pearl not yet noticed from the global audience, even though some of his works are part of the permanent collection of international fame art institutions (such as the Metropolitan Museum of Art), and his work was acclaimed by The New York Times and The Los Angeles Times. Awaken Beauty, curated by Ioan Szasz and Michael Labrie, is “the artist’s first-ever comprehensive museum retrospective”, as stated in the W.D.F.M.’s website.

Eyvind Earle was born in N.Y. In 1916, and died in California in 2000. Starting his career at 14 years old, with a solo exhibition in France, the artist joined Disney in the 50s as an assistant background painter. In few time his peculiar style, consisting in a vibrant colors palette, obsessed care of details and technical mastery leads him to become the Artistic Director of the Sleeping Beauty’s backgrounds. 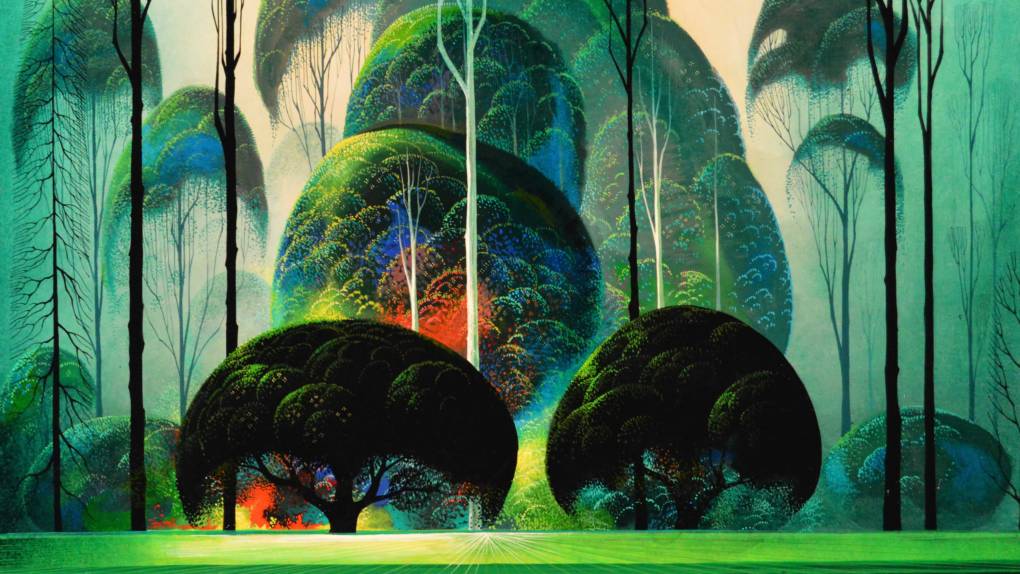 The overall exhibition is something stunning, but 3 elements in Eyvind Earle’s paintings really stroke me: the contrast between light and dark, the stylized language, the shapes recalling the traditional Chinese and Japanese paintings.

1.Light and dark. What contrast can do to an object is incredible, Caravaggio knew the power of light and shadow very well; we could even say that his subjects started with their dark edges, and it was only after that the brush would grace them with light. I would say that Eyvind Earle was doing the opposite, starting from the light and adding dark afterwards. His landscapes are a triumph of colors —green becomes almost yellow, red always stands near to black, blu gives the feeling of depth leading you to almost forget that there’s a wall behind that painting. None of these visual effects would be possible without the contrast of colors with dark, that sometimes is squeezed into the images with discreetly, some others it’s the main character of the painting. It is the dark that makes Earle’s landscapes majestic. 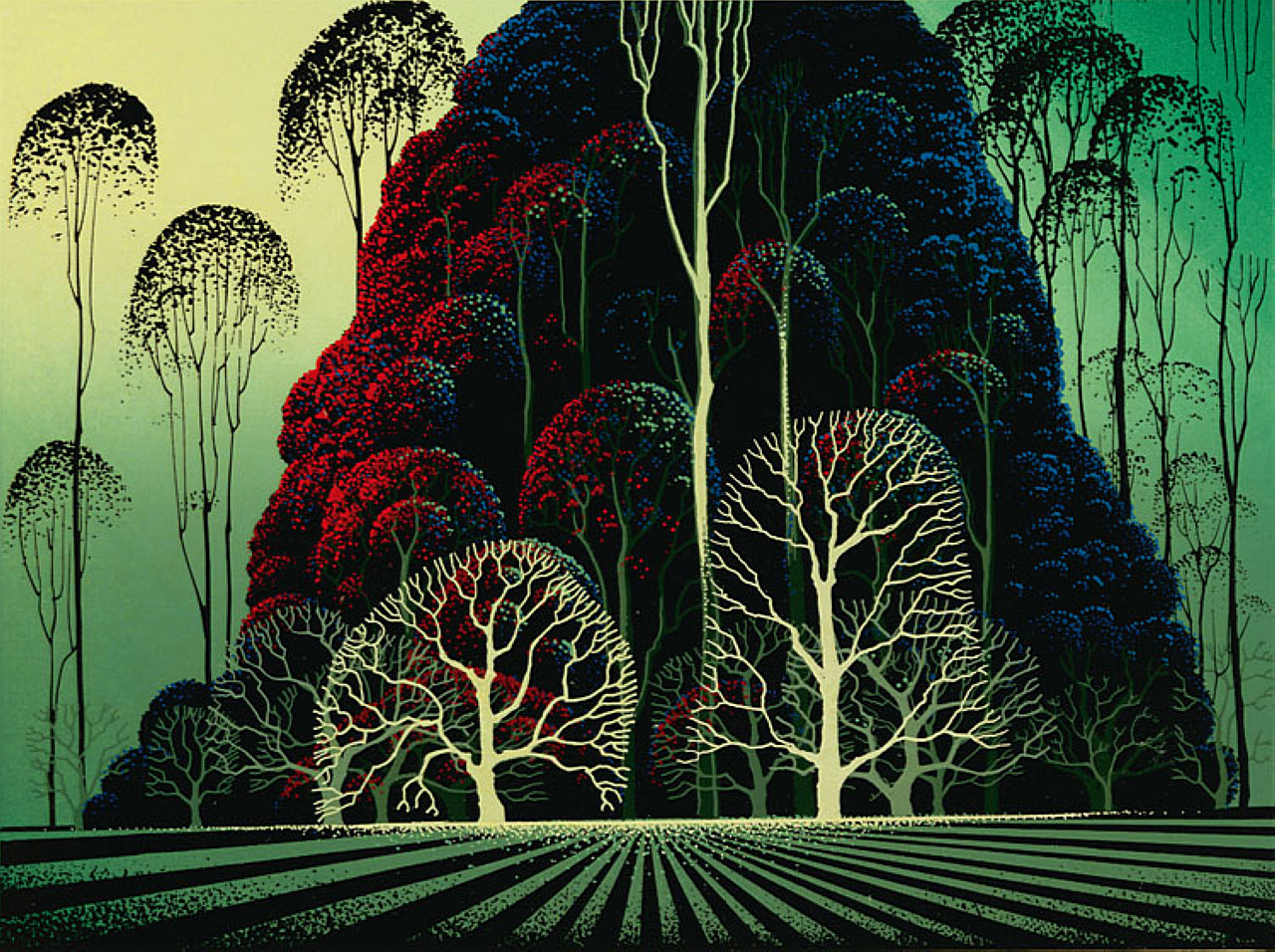 2.Stylized language. Trees become thin threads, bushes have ordered shapes, the delicate outlines of hills recall feminine bodies, foliages are like Cezanne’s prisms —cubes, pyramids, spheres. Earle’s compositions are, therefore, perfectly structured, there’s no leaf out of place, not a brunch too much. If one of these elements is out of the group, it is because of the artist’s will. Everything is part of Earle’s artistic, I’d rather say fairy tale like, vision. Although this stylized language, the artist shows infinite attention to details, visible in the texture of foliages and pastures, in the meticulous placement of branches, rocks and other elements of the composition.

3.Traditional Chinese and Japanese Painting’s Echoes. What I’ve first seen, looking at a tree’s large silhouette, is the homage to the Chinese and Japanese landscape paintings, made through the American lens. Eyvind Earle and the Asian Masters share the interest for stylized figures and for “contrast”, with this latter I’m referring to the palette of bright colors for Earle, and to the simple one of black and white (with few exception of pure reds or other primary colors) for the Asian side. In Earle’s paintings, I also recognized lines correspondency with some traditional Chinese paintings —verticals and horizontals draw sharp landscapes, sometimes softened by circular shapes, like the ones of foliages or cascades.

For example, here there’s a wave painted by Earle that seems the twin of Hokusai’s (below). 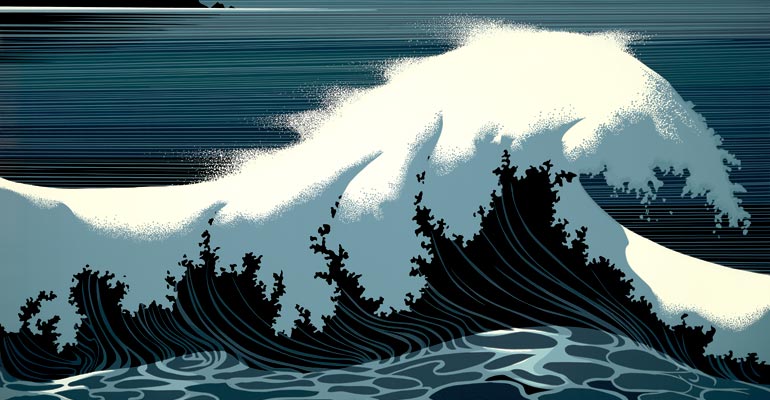 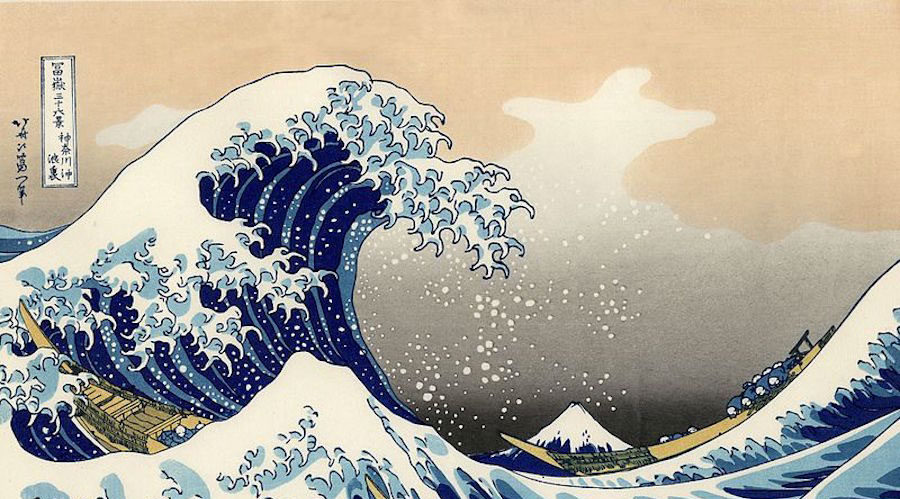 I’m not sure if the link with the traditional Chinese and Japanese landscape painting was clear and wanted for Earle; in case it was, I’m not sure of his inspirational source (Books? Travels? Postcards?). What I’m sure of is that, in case my point of view is correct, we should use the word emulation rather than imitation to describe Eyvind Earle’s relationship with the traditional Asian landscape painting. 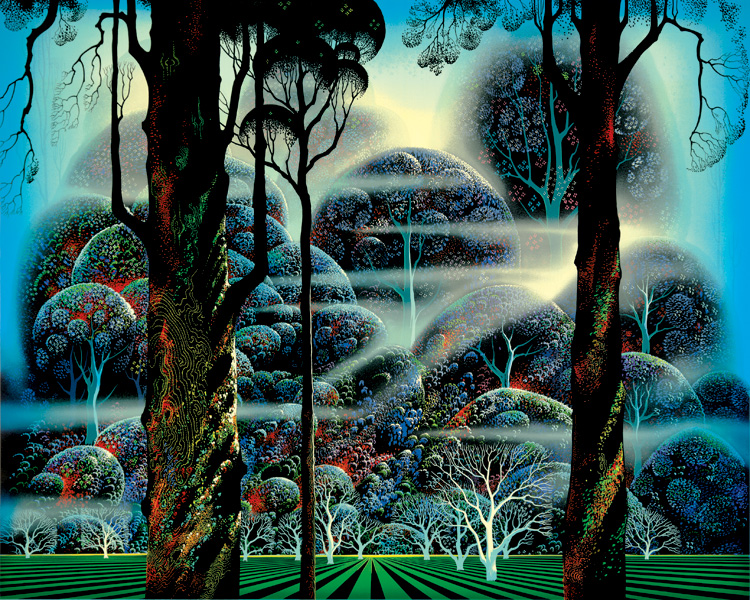 Finally, in 2015, Earle was inducted as a Disney Legend. Awaking Beauty is an exhibition that can’t be missed, since it’s one of those exhibitions that brings a deserved light to an artist still in the shadow for big part of the audience, while transforming the popular perception of a specific style (in this case animation) from “Technique” to “Art”.