Giordano Biondi is an artist that I had the luck to meet and to work with a while ago. We met during my first exhibition at the Make Your Mark Gallery in Melbourne, and after a couple of words of presentation we ended up talking about our vision of Nature. Mine was the one pictured by the Italian painter Giovanni Segantini in Le Cattive Madri (1894). His, more peaceful was soon to be exhibited at Make Your Mark with the series Naturalia.

After that first, brief conversation we already knew that something incredible would had come out of it. A couple of months later Metamorphosis Exhibition at testing Ground, curated by me and Giordano, has gathered the works of an heterogeneous group of artists reflecting on the relationship between Nature, Society, History. That was just the beginning of a collaboration between me and Giordano, an avant-gard and profound partnership called NISM. But that is another story.

Giordano Biondi is a conceptual, and I would also add narrative, artist. Throughout his young and already brilliant career he has used mixed media like photography, installation, drawing, digital painting, until arriving at his last chosen tool: bedsheets. Giordano is a person of few words. Actually he doesn’t really need many of them, because he has a talent for observation that allows him to select the most important ones, those that perfectly match with what you have in mind. In the same way his minimalism is thorough, a quality visible also into his figurative works, such as Emblemata, Naturalia and The Folds. 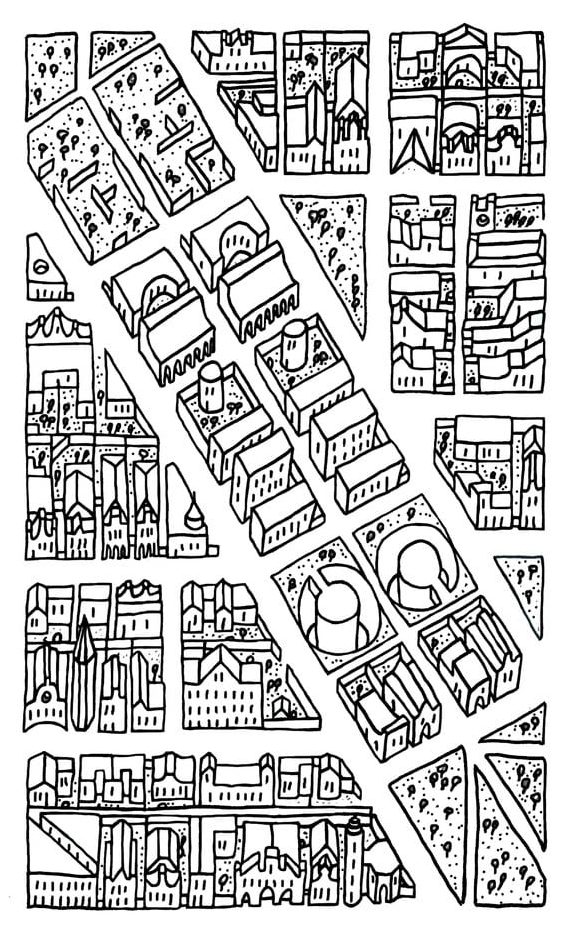 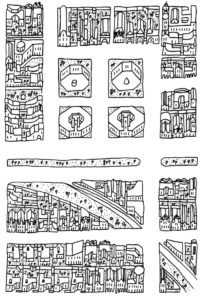 Emblemata is a series of drawings of imaginary cities realized in 2013 and exhibited at the Fort Delta Gallery. Nothing to do with the Calvino’s Invisible Cities, although the series’ title raises a natural memory. Giordano Biondi creates well structured urban landscapes: despite the crowd of houses everything is perfectly orderly.

The word “emblema” has greek origins; it means “what is kept inside” referring to the meaning held within an image, indeed the antique Romans used this same word to refer to mosaics and high relief sculptures. Nowadays the word carries a symbolic meaning, nonetheless expressed by a tangible object. Therefore we can assume that an emblem is just a means, an instrument to convey a more ample concept.

The intelligible world has a profound meaning in Giordano Biondi’s artistic practice. Although Emblemata‘s cities belong to the figurative field, they go by far beyond pure illustration. Each one of the six drawings represents the contemporary social and urban dynamics. They look like maps, but they aren’t. This work re-elaborates the local reality of Melbourne with influences from the Renaissance’s ideal cities. For example, geometry, symmetry and order are present both in Giordano Biondi’s cities and in one of the most famous painting of ideal city, realized by an anonymous Florentine in the XVth cen.

The geometric figure of the star, inserted between the buildings to create space in Emblemata number 4, recalls the plant of Palmanova, the city founded by Venetians in Friuli Venezia Giulia (IT) at the end of 1500. We find six extremities in Giordano Biondi’s drawing (oh, there’s also space for a Babel tower), while the Palmanova’s star-like plant has 9 tips. A different Emblemata‘s city is marked by an alien sign, more appropriate to a futuristic era than to the Renaissance. The concept is still the same though: synthesis (you can see the whole series – and so the following – on Biondi’s website). 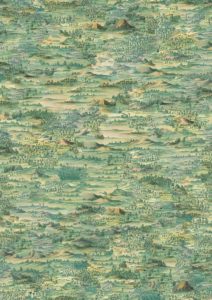 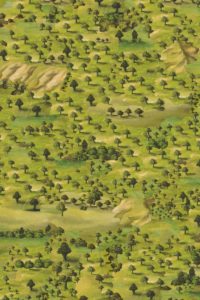 Naturalia, one year older then Emblemata, is the floral version of the imaginary cities’ series. Same bird-eyes’ perspective, same elegance. Mountains, trees, bushes and waves are nestled into the landscape with order; in the real world they would correspond to plastic and polystyrene constructions, like the toy miniatures where mechanical trains pass through whistling.

Naturalia‘s panoramas reflect the man’s look on landscape filtered by civilization’s parameters: judgement, logic, beauty, and I can add patience, Giordano Biondi’s own quality. The Human gaze on nature will never be pure. Although the human figure is absent from the pictures, you can find it inside their ordered structure. 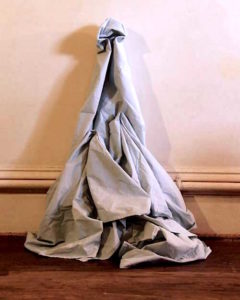 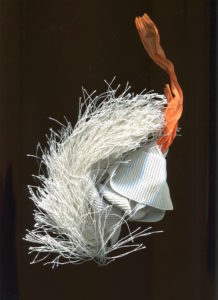 The Folds was realized in 2015, after a time of research around space and matter started with the artistic project Welcome Home, curated by me and Giordano Biondi. This is my favorite Giordano work, and I am sorry that I didn’t have the chance to see it in person, it must be a moving experience.

I can just visualize how it could be: I approach the white room from a shady aisle, at the end of it, on the left hand side there’s an opening. I can peek into a shining nook of the white room, nothing more though. So, for the moment I am only prepared for the white empty space of a room, not sure of the dimensions, something tells me that it must be big. I stop at the bottom of the aisle just for few seconds, savoring the the pleasure of anticipation before succumbing to the unexpected.

I pass through the opening still pointing to the nook, coming from the shadow. I start to turn my eyes to the left. Still white, only a window in front of me. Now I can see the whole room from the opening: it’s rectangular and long, not very large. The window opens on a silent landscape similar to the one that unfastens behind the Duca di Montefeltro’s shoulders, a fifteenth-century, surreal and gloomy view painted by Piero della Francesca. I keep turning my gaze, I expect to unearth something precious. Here they are, a crowd of soft colorful ghosts. Somehow the view from the window had prepared me.

The Folds appear like an epiphany, emerging from the empty space without bothering. Actually, it seems that they belong to that empty and quiet space. I stare at them for a couple of minutes, I walk around them like as if I don’t want to wake them up. They sprout from the floor in little groups of 3 or 5, some solitary, one stands by itself. I have the same feeling described by Murakami in The Bakery Attack: “I’m in a little boat, floating on a quiet sea. I look down, and in the water I see the peak of a volcano thrusting up from the ocean floor. The peak seems pretty close to the water’s surface, but just how close I cannot tell. This is because the hypertransparency of the water interferes with the perception of distance”.

I couldn’t expect anything less powerful, penetrating, aesthetic from Giordano Biondi. He perfectly knows how to get to the point without you noticing.