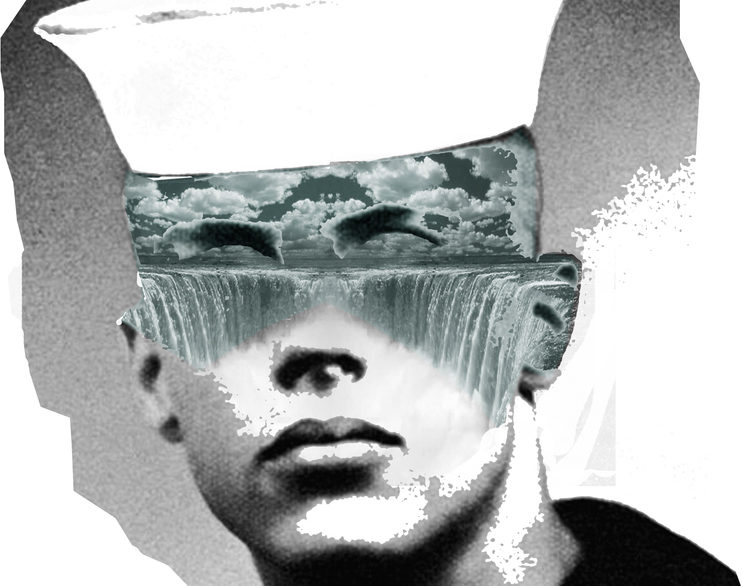 Ok, I want to make an essential introduction: to appreciate David Mithra’s work you need to unearth the Dada spirit from your subconscious; everyone has got one. It manifests in the attraction for the “horrid”, in the instinct to voyeurism, it comes alive in the veins of narcissism that pulsate, occasionally.

David Mithra is one of the most brilliant young artists I know. He just entered his 30s and he has changed his style many times since I have known him; now he’s in a black 90s mood, still eccentric, still unique, still coherent. He’s a ballet dancer and a burlesque performer and a fashion stylist. After having danced with different dance companies in London, Naples, Rome, New York and Paris, he ended up pursuing the Fashion Design Master at IED, in Milan, thanks to a scholarship sponsored by Vogue. Finally we can say that his work fits in the visual art field, this boundless sector that allows you to try whatever you want, but with only one fundamental condition: to be coherent.

David Mithra’s visions are built on a geometrical structure of angles, lines and a rich digital collage. His images strongly recall John Stezacker: using cuts, photomontages of landscapes and of colorful patterns on black and white pictures. Most assuredly David Mithra’s images emanate an intense and different energy, like bows shooting arrows.

David is not an easy person: he’s creative (not an original word, I know, but it’s the only one that occurs to me when I’m thinking of him). His thoughts and words come out so quickly that sometimes you just loose the thread of what he’s saying and you kind of want to start following him in his flight, and if your mind is free enough to fly he’ll show you wonderful things. I am going to talk about some of these.

In this series you can see what I mean when I say talking with him may cause you to lose the thread of his speech. This is one of his most surrealistic works, in which the concept of space is extricated from any physical rule; Space becomes a world of imaginary possibilities where planets, children and buildings explode in a blur of light. 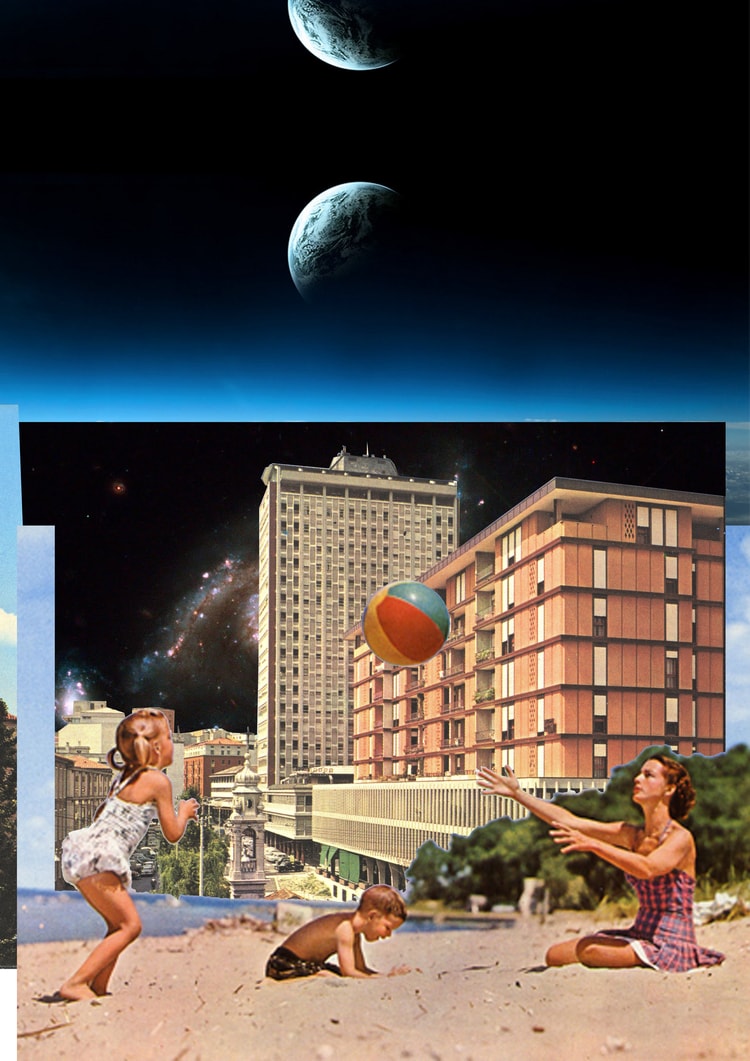 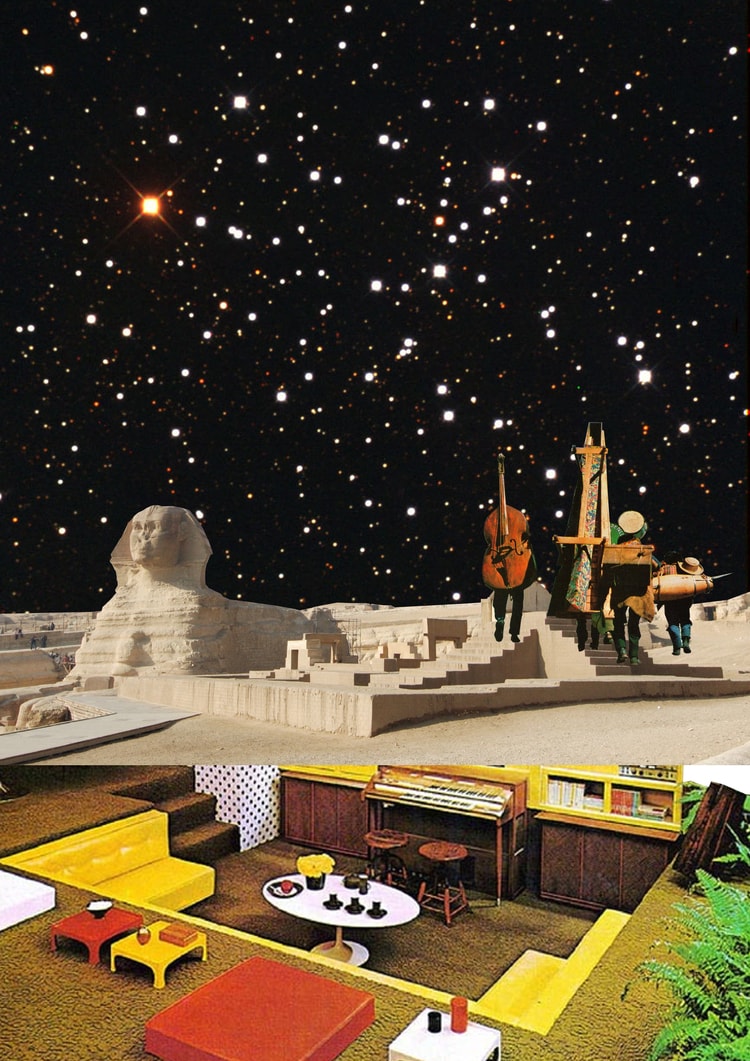 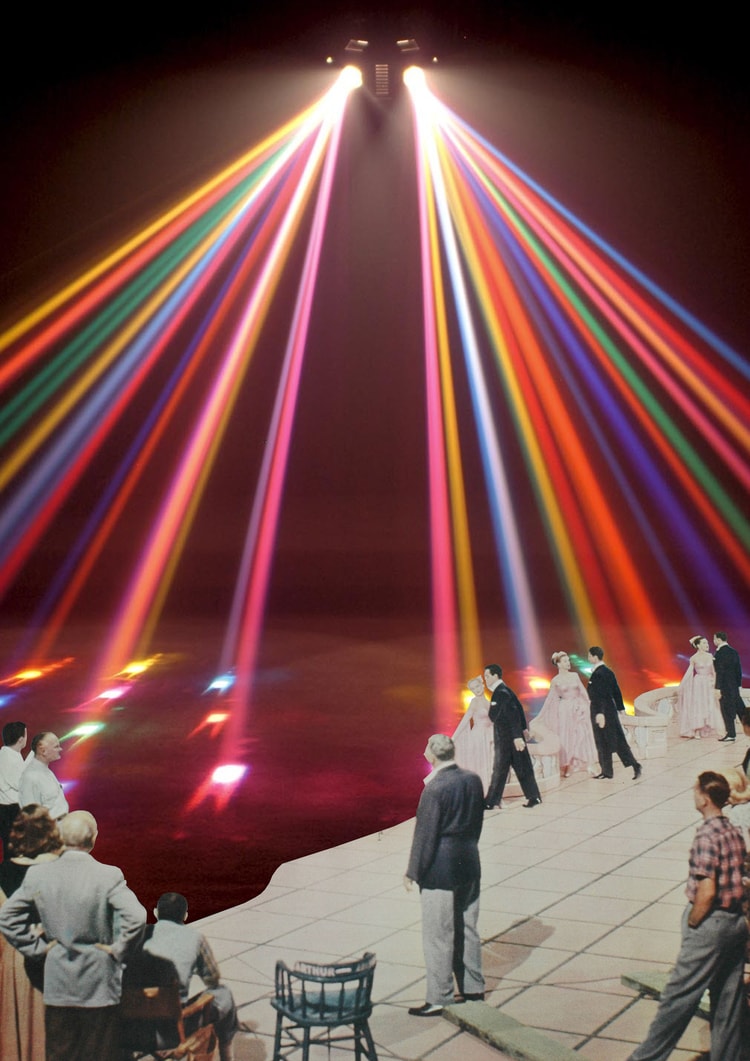 David Mithra’s own statement is more than enough to explain what’s behind these odd images: “We live in an ordinary world, thus we need to appreciate the beauty. We need to look at common things because they evoke pleasant feelings. From these you can develop other magnificent things through imagination, that can be a reality. Man has got one duty: improving the surrounding world through his creativity and personality.” 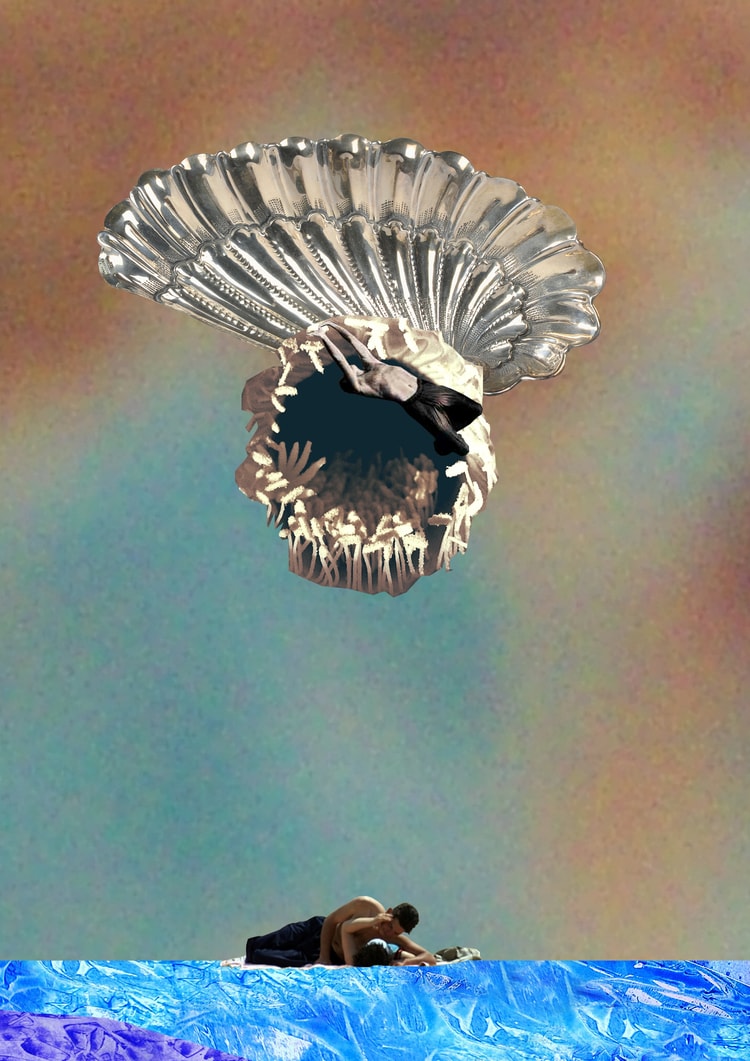 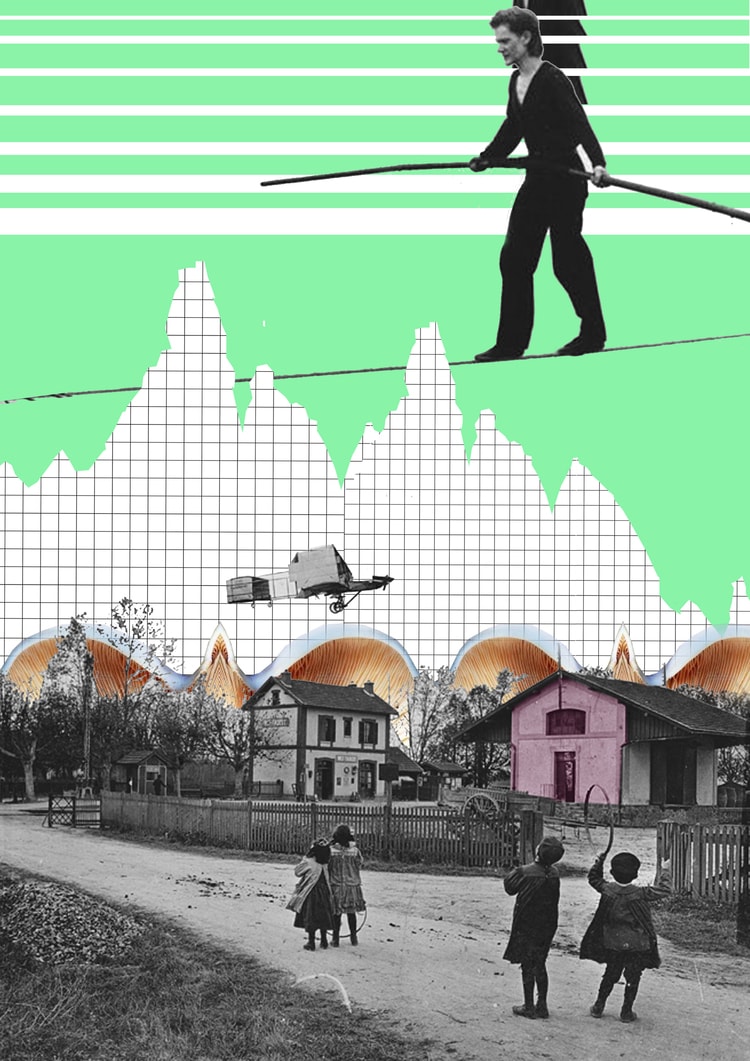 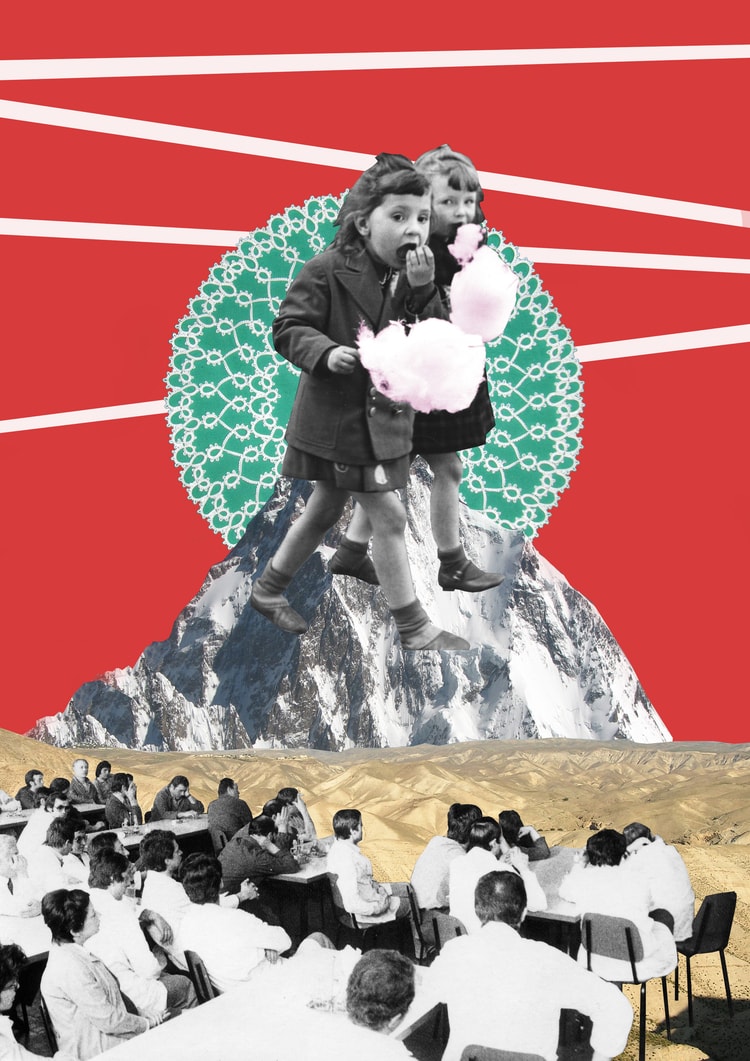 Indeed this is a wonderful thing—it’s the place where unaccomplished actions come from. Isn’t it wonderful that our life can be shaped by an intangible tool? Which is your biggest fear? Realizing what most frightens you will let you understand how many of your dark thoughts, apparently not connected, come from a unique fear, the biggest and most hidden one, an unmentionable one. Well, David Mithra mentions a few of them, they might relate to you. In my case there’s a particular one that really I can’t face…I won’t bore you telling you which one. 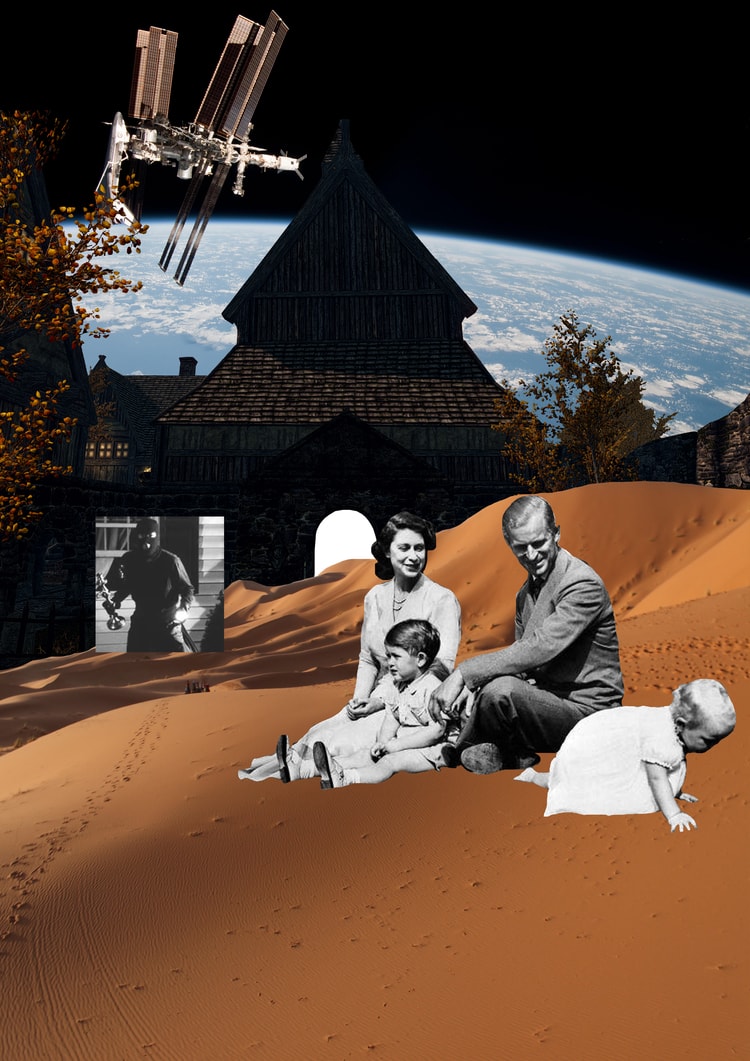 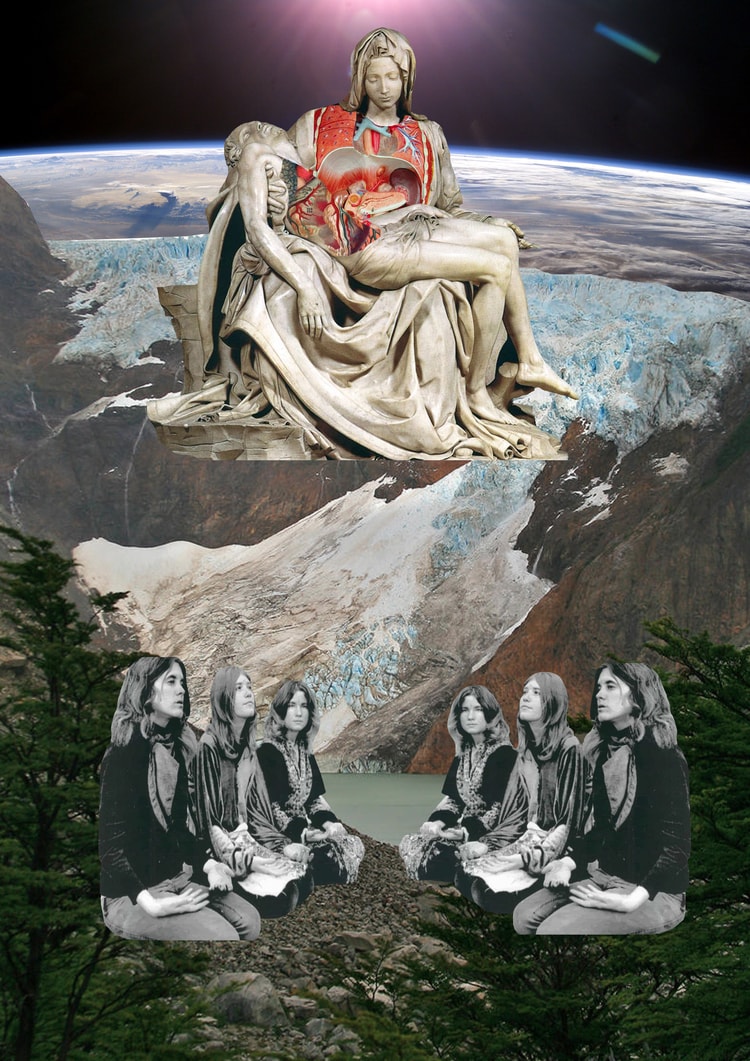 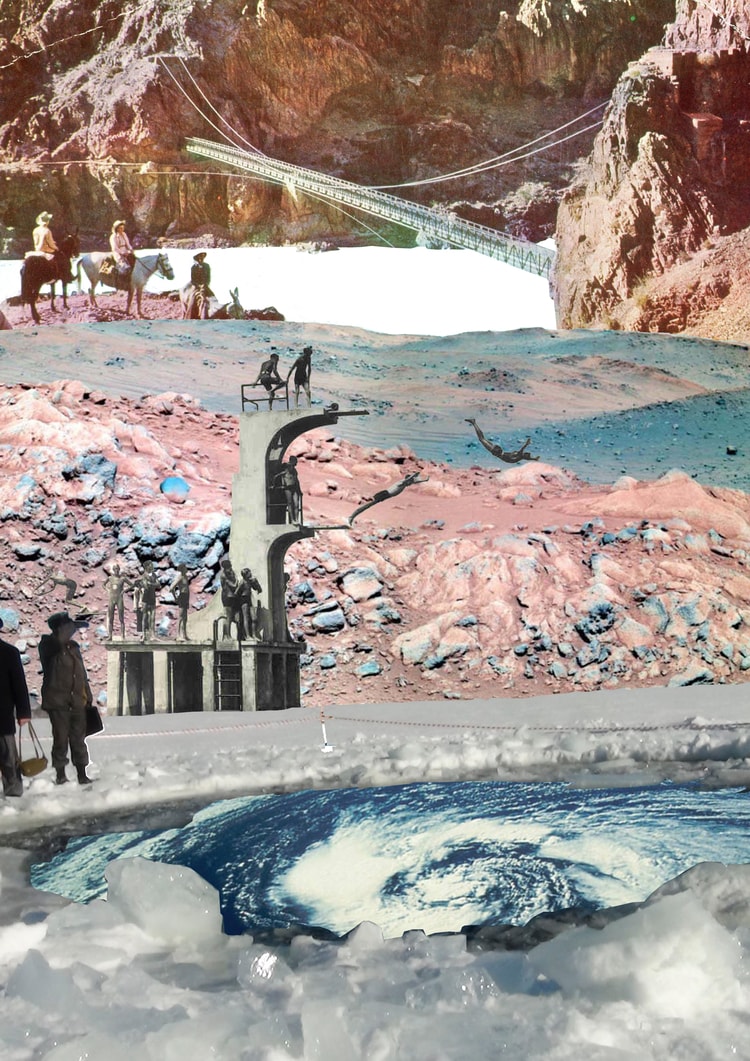 The most representative visual work of David Mithra is doubtless his self portraits series. In this he uses his own body to experiment with the concepts expressed from the several collage series, materializing them. For this reason part of his artistic practice is recognizable as Performance and Body art. Narcissism, seduction, provocation, intimacy, loving’s desire and longing to disturb shoot out from the self portraits through a saturated composition, in which every detail is attentively studied. 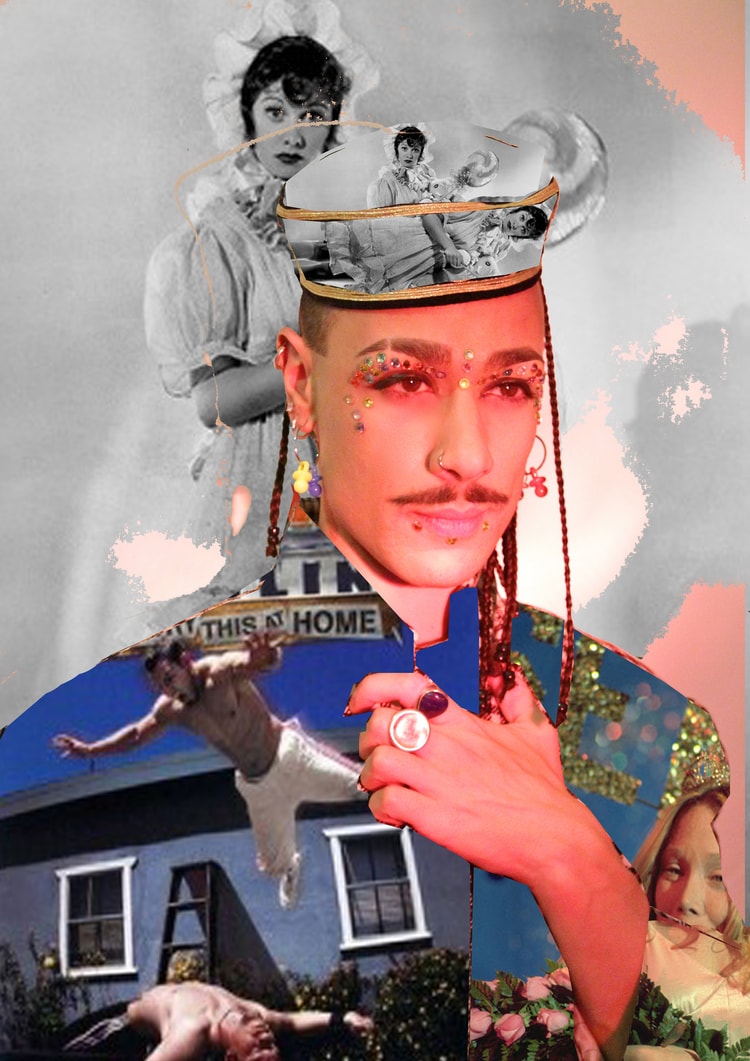 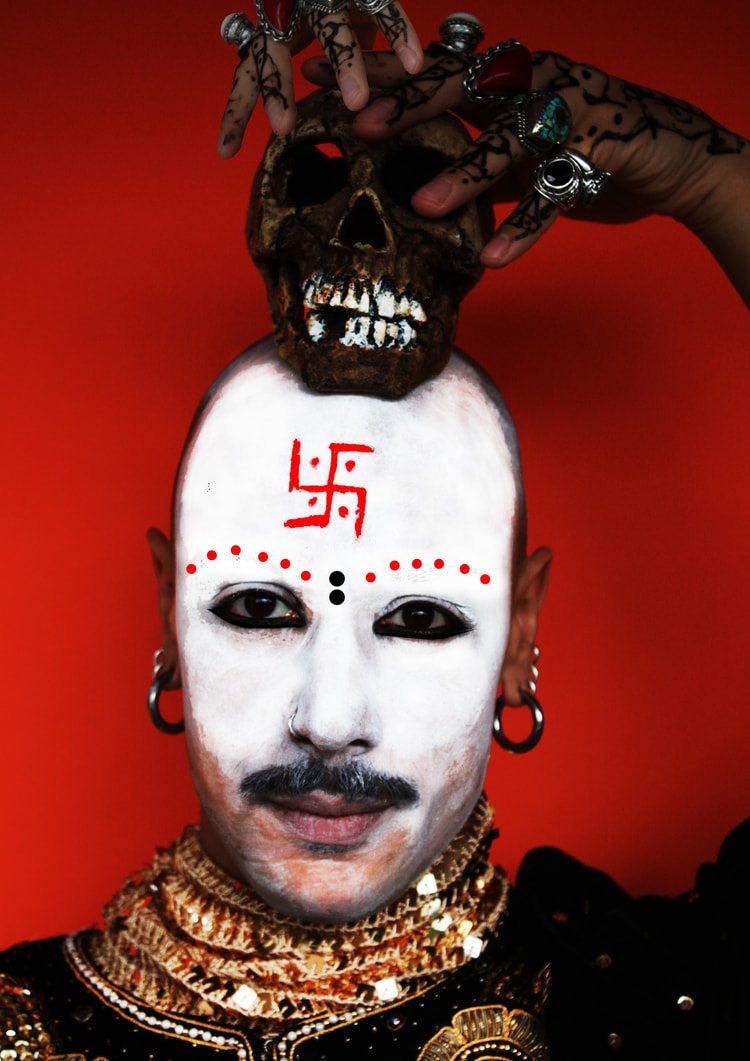 At this point you can understand why at the beginning of this article I used the adjective “creativity” to describe the artist’s outline. Nowadays this word is manhandled from the elite of art critics, like Camillo Langone to mention one. Few months ago I finished to read his book Eccellenti Pittori, that narrates the stories of several young Italian figurative painters. Langone writes: “more mystifying then the adjective ‘experimental’ is the noun ‘creativity’”. Well, because largely used, these words could be actually seen as mystifying; the meaning of a word can easily loose its purity when becoming popular. Although this I do believe in the actual value of experimentation and of creativity, and in the importance of protect their true meaning. For me “creativity” is a word full of hope that embraces the power of human being, the extraordinary capacity of transforming things, literally, by a positive and diverse perspective, in the possibility of reshaping destiny through free choice. “Experimenting” means going beyond the known boundaries, try new path of cross-pollination between different areas, or bringing to light the soothed potentialities of a good tool.

Creativity gathers infinite energies sometimes converted into Art, experimentation is the process moulding those energies. David Mithra uses both with audacity, in a word: he dares, a courage missing in many art critique’s books.